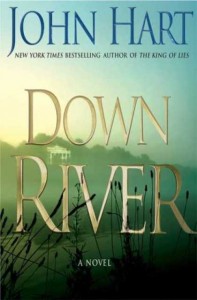 Two books in, and I’m really starting to dig mystery writer John Hart. DOWN RIVER, a hard-boiled thriller about a prodigal son returning to a small southern town just as the killin’ starts, again, reads easier than Hart’s debut KING OF LIES. In fact, I think you can almost see Hart’s writing become more confident and literary (whatever that means) as this novel progresses. While the beginning reads like an extension of LIES’ noirish world, by the end DOWN RIVER becomes something stronger, sweeter. There are twists and turns at every chapter and the pace is so unrelenting you can’t find a place to stop. And, like all good mysteries, the story here is what lies in the hearts of the family members at the center of the novel. Who knows grace? Who knows evil? Good stuff. Highly recommend.