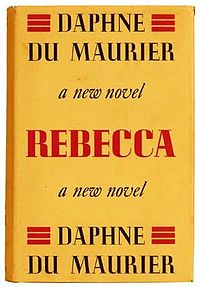 I’ve been trying to mix up my reading list a little so I can tackle some classics in between pop culture must-reads. I read somewhere years ago that one of Stephen King’s favorite stories was an old gothic yarn called Rebecca and so I went to the used bookstore around the corner and asked for it. A woman looking through paperbacks a few feet away stopped what she was doing and looked at me. “Last night, I dreamt I went to Manderley again,” she said.

A very odd thing to say to a stranger in a bookshop. Turns out it’s the first line of the novel. And like the woman in the shop, I think that line and many others from this book will haunt me for a long while.

Some call it a ghost story, this tale of a young woman who meets a rich and sad windower on vacation and follows him home to his mansion estate. But it’s just as easily interpreted as an exploration of psychology, of the narrator’s own paranoia and psychology. Is it the ghost of Rebecca, the dead wife, who haunts the narrator or is it her own growing insecurity? The book is full of mood and tone and just great writing and the last hundred pages almost seem to catch fire and collapse around the reader in successive twists and turns as the great Manderley estate, itself, quickly comes undone.

And any writer who can make rhododendrons so sinister is quite good at what she does.