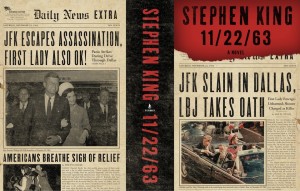 I read It when I was in the 4th grade. I toted that gargantuan book–the one with the monster claw coming out of the sewer–around with me from class to class. Eventually my father was called and I had to finish it at home. I didn’t understand half of what I read but I knew right away that there was something magical about the man who wrote that book. He was a master storyteller and it was a pleasure to work towards understanding his stories better.

I still get butterflies in my stomach when I buy a new hardback of his, usually the day it’s published (or, in the case of the Dark Tower, advanced ARCs sold illegally on eBay–hey, I can’t wait). I’m also a sucker for time travel stories (check out my Tumblr!). So, I was especially excited to pick up 11/22/63. And he does not disappoint. In my opinion, it’s his best work since The Green Mile.

You know the gist by now: an everyman discovers a portal into 1958 at the back of a diner in present-day Maine. Decides he’s going to stop the assassination of JFK. Mayhem ensues.

Ah, but it’s more… and less. More, in that it’s also a moving love story, a rumination on a violent world of men, and sympathy for the devils that live around us; less, in that, well… that ending. That heart wrenching and wonderful ending I’m not going to ruin, other than to say this (SPOILER SPOILER): like Catcher in the Rye, I’m not sure the main character actually accomplished anything. If you’ve read it, think about it. In the end, what did Jake Epping really do? Damn it if that’s not the point, huh?