Read This: A Visit from the Goon Squad, by Jennifer Egan 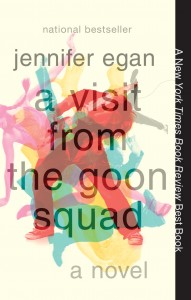 A handful of stories have changed my life and every time I find one I worry that it might be the last.

These are stories that inspired me to write better or to look at the world differently or to look at myself differently. The first was Stephen King’s The Gunslinger. Later came Cloud Atlas and Garp. I just finished a new one: A Visit from the Goon Squad. I was so taken by this novel that, halfway through, I had the university bookstore order a bunch of copies so I could teach it in the Fall.

What’s it about? Like the other books that fall into this category, it depends upon the reader. On the surface, it’s the story of several people’s lives and how they intersect with each other through a span of forty (or so) years. But, it’s also about: music; writing; love; compulsion; obsession; destruction; time; grace; insanity; sanity; city life; blondes; sex; regret; empathy…

Each chapter is from the point of view of a different character, someone you’ve met in passing in an earlier chapter. And each chapter is told in a different voice, or style (including second-person and power-point). Most of the people we encounter are caught in orbit around two people: Sasha (a young kleptomaniac) and Bennie (an aging music mogul). Though, it could be said Bennie finds himself in orbit around Sasha, too (I suppose he’s Jupiter).

The novel is structured like an album, complete with A and B side and chapter titles that gives us the feels of good song titles. Music (and art) is a thread that weaves these stories together, after all. There are harmonies and dissonant cords. You get the picture.

There’s just so goddamn much meat on the bone. The only thing I can think to compare it to is Ulysses. But it’s not that pretentiously dense. It’s accessible (I think). There are enough allusions and connections and themes to get lost in for a long time.

In the end, this is a book that does an impossible thing: it approximates the elegant complexity of life, and how our path veers off course in mundane moments, and how we are all kept on notice by the goon of time.