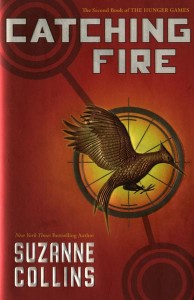 Okay, so I’m officially caught up in the Hunger Games trilogy, now. Can’t wait to pick up the third book tonight!

The first book is a masterpiece. And there is much that I love about this second story, Catching Fire. It is, after all, the Empire Strikes Back of the trilogy. Katniss, fresh off her victory in the Hunger Games, finds herself unwittingly the symbol of rebellion in this post-apocalyptic world where the Capitol rules over 12 separated Districts. The stakes are raised when President Snow announces that the 75th Games will be a special “quarter quell” in which previous Hunger Games winners will face off against each other. Really, though, its a clever ploy to publicly kill Katniss and squash the rebellion. And when we get to the games (finally) the book becomes impossible to put down.

Collins is an expert at foreshadowing and misdirection. She’s a magician of a writer, able to surprise even the most cynical readers. And, make no mistake, surprising a reader is a VERY hard and daring thing to pull off. If you fuck it up, your reader ends up hating you because it seems condescending.

So, yes, I like this book. However, it takes its time getting to the action. The first hundred and fifty pages is a lot of meandering. In some ways it reminded me of the first half of the last Harry Potter book. We don’t have a feel for where the narration is taking us and that feels disconcerting. The only reason, I think, that we hang in there is because we trust Collins as an author. We know she’ll get take us somewhere nice soon. And that seems just a bit like cheating.

My hunch is that the meandering beginning of Catching Fire is actually an attempt by Collins to foreshadow aspects of the final volume. In some ways, Empire did this, too. All second parts do this when the author knows it will be a trilogy, I guess. We’ll see.

There was really only one place in the novel that seemed like a missed opportunity, though. (SPOILER COMING). When Peeta’s heart stops beating, I wanted the cannon to sound. That would have been cool.