Read This: Last Night in Twisted River, by John Irving 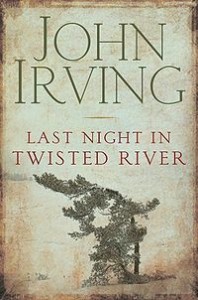 A John Irving novel is a different sort of animal. His books usually delve more deeply into a character than I’m used to. Most times the narrative is simply about the life of a particular character, some times from conception to death (Garp). His books take time to read, at least for me. And the stories don’t seem much like strict narratives as they do a series of experiences. But I love every minute of it, even if it’s heavy lifting.

Irving always teaches you something. You can guess that, in life, he’s a curious type of guy and loves to share the insights that he’s gleaned from close study. In Last Night in Twisted River, he teaches about such seemingly detached subjects as logging, fine cooking, and, of course, the mechanics (and importance of) writing. Like in many Irving tales, there is much loss here but always grace, too.

This novel, to me, seemed like a return to the themes of Garp (my favorite Irving story), like an older artist coming back to an early style to show us what he’s learned in the years since. On the surface, it is the story of a man and his son on the run from a murderous North Country cop. But, like Garp, it’s also about how to navigate a life full of accidents. It’s truly wonderful and I already miss spending time with Danny and Ketchum and the cook.

I ear-marked a passage that I really love and wanted to share. It’s from near the end, but doesn’t give anything away. Here it is:

“We’ve been an empire in decline since I can remember,” Ketchum said bluntly; he wasn’t kidding. “We are a lost nation, Danny. Stop farting around.”