Read This: My Friend Dahmer, by Derf 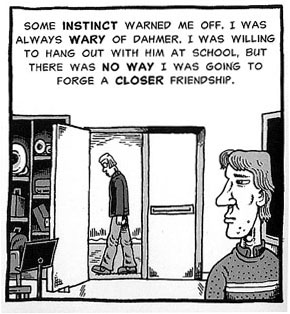 The artist mostly known as “Derf” was a bit of a mystery during my tenure at the Cleveland Scene and Free Times. He was the guy behind the coolest comic strip in the paper, The City, which ripped on Cleveland every week but also seemed to celebrate its crazy residents at the same time. I would occasionally see him at company parties, quietly watching from the back, this tall dude with a long face who usually seemed pissed at something.

There was this rumor he’d been friends with the serial killer Jeffrey Dahmer in high school. I’d never doubted it. But I was a little surprised when he dared to turn his artist’s eye to that part of his life. It would be tempting for any storyteller, sure, but in order to go there you have to show Dahmer as a sympathetic character. Because he was, after all, human. And a friend to some people. And would readers really want to go there?

Earlier this year, Derf finally got around to telling his story in My Friend Dahmer, a thick, gorgeous graphic novel that presents the cannibal killer as a tragic character, someone who might been saved even, if only one fucking adult had bothered to wonder why Jeffrey was acting so strangely and had cared enough to get him some help. Dahmer did not go quietly into full-on sociopathic insanity. The signs were there — animal mutilations, binge drinking at 15, a shocking lack of empathy for fellow human beings — and they were hard to miss. It’s like watching Anakin turn into Darth Vader, only slowly and with no definable event to motivate the fall.

The book covers Dahmer and Derf’s last years of high school in bucolic Bath, Ohio, one of the safest neighborhoods in the state. And by the end of the summer following their senior year, both have discovered their passion — Derf has become a fledgling artist, Dahmer a practicing psychopath and murderer. Drawn in high-def contrast, with his slightly-grotesque portrayal of the human form, this book serves as the universal countering force of Dahmer’s own dark obsession. The art’s creation only made possible as a result of the acts it chronicles and the effect it had on the artist.