Read This… The Last Policeman, by Ben H. Winters 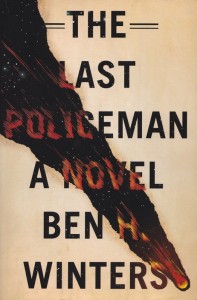 It’s been awhile since I’ve come across a concept so tight and perfect that I had to immediately seek out the book and devour it. But when I heard the pitch for The Last Policeman — a young detective investigates one last murder before the end of the world — I was taken. Usually I’m a little disappointed by these impulsive reads. But goddamn. This one is everything I dared hope for.

I actually listened to the audio version of the book on a 2,000-mile journey around New England during the reporting of my book on the Maura Murray case. So I was in the right mood to listen to this gritty and dark mystery.

So here’s the longer set up. Young Hank Palace works in Concord, the town in which he grew up. He was promoted to detective around the time scientists first spotted 2011GV1, a ginormous asteroid on a collision course with Earth. It is big enough to end civilization as we know it and there is nothing we can do to stop it. As the months tick toward impact, humanity begins to fall apart. Suicides are commonplace. And a lot of people are just quitting their jobs to spend the remaining time finishing their bucket lists. And then Palace finds a a body in a McDonalds bathroom. It looks like another hanger, an accountant who has strangled himself with a belt to hasten the end. But… Palace thinks maybe this one is a murder.

The rest of the book reads like a classic who-done-it, as Palace follows the meager bits of evidence toward their ends. In the process, he uncovers drug runners, insurance fraudsters, and, of course, a femme fatale. There’s also some very interesting side stories that weave in and out of the main narrative: is Palace’s sister caught up in some doomsday cult; is the asteroid really going to hit us or are we being lied to; and what’s up with that scifi serial everyone is obsessed with seeing?

The structure of the story reminded me of Watchmen (especially one eerie scene between Palace and a doomsayer wearing a sandwichboard) and the graphic novel is even mentioned, once. In the end, though, the mystery is very grounded in truth. There is no scifi twist to the murder. The killer had very understandable cold-blooded motive.

The second book of Winter’s Last Policeman trilogy comes out this summer. So read this before July. You’ll want to be ready to devour the next one.