Read This: The Shadow of Death, by Philip Ginsburg 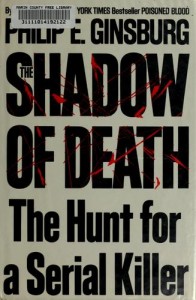 Shadow of Death is as much about the loss of innocence of a region in America—and, America itself—as much as it is about the dogged hunt by North Country detectives for a killer of women. First published in 1993, journalist Philip Ginsburg’s book tells the true story of a wave of murders that took place in the early 80’s around the town of Claremont, on the border of Vermont and New Hampshire. If In Cold Blood was a testament to its time, Shadow of Death shows just how far we’ve fallen in the decades since.

Beginning as early as 1968, as many as nine people fell victim to a sadistic serial killer who kidnapped, tortured, and then brutally stabbed his prey to death. Finally, in 1988, a woman managed a miraculous escape and the killer fell silent. Ginsburg’s book is told from the perspective of the detectives, the victims, and a college professor who is recruited by police to figure out the killer’s mind. The professor, John Philpin, eventually becomes one of the first criminal profilers, though the effect of getting into the mind of a murderer takes its toll on him.

Though the killer is never caught, several suspects are identified by investigators one other bad man is sent to prison during the course of their search.

My interest in this book stems from my research into the 2004 disappearance of Maura Murray, who vanished not far from where this serial killer once hunted. In fact, the circumstances of finding Maura’s abandoned car locked on the side of the road mirrors once murder in particular.

Could a long-silent killer be stalking prey in the Valley again? Or are these cases related only in their similar depravity?

If you’re a fan of true crime, you must own this book. It’s taut and suspenseful all the way through. And Ginsburg’s grasp of character and place is quite artful. This book is one of the very best in its genre.