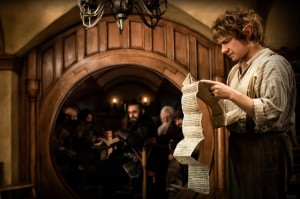 Caught a screening of The Hobbit at Valley View in Cleveland last night. This is the only place in NE Ohio where you can see it in 3D at 48 frames per second, in XD sound, the way God and Peter Jackson intended. A single ticket sets you back $14. But is it worth it? What is 48fps really like? Here are my impressions the morning after.

Remember that scene in The Prestige where Hugh Jackman shows off his Tesla transporting machine for the first time and that old stage producer is sitting there and kind of jumps in fright when old Hugh disappears and then reappears behind him? The old man says, “Forgive me. It’s been so long since I’ve seen real magic.” And then he warns him to “dress it up” a bit so the audience can still pretend it’s just illusion. That’s pretty much what it was like.

All the critics and nerds whining about how the 48fps makes the film look fake have it wrong. It makes it look too real. More than you’re ready for. For me, it felt like I was at Hale Farm and Village, that Civil-war era community they took us to in gradeschool. It felt like I was immersed in a artificial setting watching people act out a scene around me. It’s so real you become aware of the characters in a way we are not used to. And that’s the best way I can explain how it feels. It feels more like a stage production than any film you’ve ever seen. But that’s not bad, in my opinion. It’s just a different experience. It might be film but it’s not a MOVIE and it shouldn’t be called one. This is something new. So new, there is no name for it.

You know what would really be fucking cool in 48fps? A courtroom drama. Something like 12 Angry Men. Something where you’ve got real people in a real, tight situation. That’s how they should have introduced 48fps because it’s so goddamn real it messes with your mind when you see things like fighting rock giants and trolls and orcs. The immersiveness of the experience is telling you, holy shit, that’s a real goddamn goblin. But your mind is too smart for that. It insists it can’t be real. And then you’re spending all this time fighting with yourself. It kind of pulls you away from it.

For all its faults, you owe yourself to go see this movie in 48fps/3D. It will remind you of how you believed in real magic when you were a kid.