Read This… The End of Eternity, by Isaac Asimov 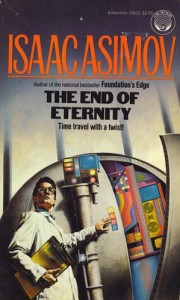 I love going back to the classics. It’s fun to see what inspired modern-day novelists and screenwriters when they were kids. The End of Eternity, by Isaac Asimov, surely inspired cool stories like The Adjustment Bureau, Fringe, 12 Monkeys, Looper, and Primer.

Check it out: the story is told from the perspective of an “Observer” whose job it is to tweak history so that the aggregate majority of humans live in the highest achievable state of happiness. Just outside of Time is this place called Eternity, where numerous, emotionless monk-like middle management types toil away in an office complex, plotting reality changes to history. Observer Andrew Harlan actually becomes one of the trusted “Technicians” who must figure out the minimal changes necessary to put Time on the right course.

Of course Harlan then encounters a young woman whose existence causes him to question the ethics of what he is doing.

This has everything we’ve come to love about time travel stories: cool machines, mind-numbing paradoxes, and philosophical discussions about the power of “intention” — and it was written in 1955! Ultimately, though, it remains a very tight story about the education of Harlan. His gal breaks it down for him in the end: “In ironing out the disasters of Reality, Eternity rules out the triumphs as well. It is in meeting the great tests that mankind can most successfully rise to great heights.”

There is also quite a nice twist ending I don’t want to spoil, involving a Galactic Empire. Trust me, it fits. It’s short and sweet so check it out.