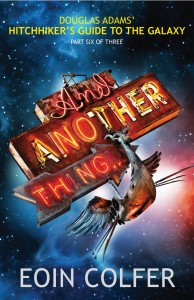 I LOVED the Hitchhiker’s Guide to the Galaxy as a kid. All five books in the trilogy. Discovering the story of Arthur Dent, Ford Prefect, Trillian, and Zaphod Beeblebrox, was an almost magical moment in my adolescence. Life changing. I knew it was something special from the moment two dangerous missiles honing in on the heroes’ ship were inexplicably turned into a whale and a potted plant. Ever since, I made sure to scan the shelves of the bookstore, wishing I might find a sixth book in the series. Even after Douglas Adams passed away, in 2001, I couldn’t help but continue looking. He was the sort of guy who might release yet another book after his death.

Turns out I was half right.

At the time of Adams’ death, he had begun to plot out another novel. From those notes, Eoin Colfer, wrote And Another Thing, which I somehow missed until I found it on a bargain bin at the Borders closeout sale in Cuyahoga Falls.

There’s a lot that’s good about this book. Colfer captures the absurd whimsy of Adams nicely, especially in the first 100 pages. Once again, Arthur and Ford must escape planet Earth before it is destroyed (once and finally for all) by Vogons. They are reunited with Trillian, as well as Trillian and Arthur’s emo daughter, Random, and, eventually Zaphod Beeblebrox, who is one head lighter than last we saw him. The crux of the story involves a colony of humans settling on a new planet and how, with the aide of Thor, Arthur and crew try to save them from the last wave of Vogons.

The middle, however, takes a long diversion into the POV of the colony’s leader as he interviews candidates for their new God and loses a little steam for a bit. Also, if I’m reading a Hitchhikers book, I want me some MARVIN! That depressive robot, my favorite character, was no where to be found. Sure, Adams killed him off in So Long And Thanks for All the Fish, but in a world of time travel and improbability drives, it’s not too hard to write him back in. If you can bring back Wowbagger, you can bring back Marvin!

Still…it was wonderful to return to the Heart of Gold and to see Arthur and company again. If you’re a fan, it’s definitely worth the read.