Just Finished Reading… At the Mountains of Madness by H.P. Lovecraft 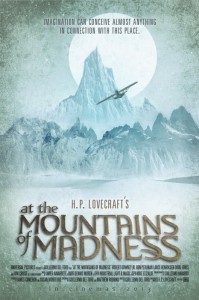 A group of scientists discover something alien frozen in the wastes of the South Pole; the idea is so overused, it has gone past cliche and into the realms of Metafiction. But it all started with this creepy story by Lovecraft, written in 1931 (unless you count the final pages of Edgar Allan Poe’s only novel, The Narrative of Arthur Gordon Pym of Nantucket, written in 1838, where Poe’s story bleakly hints at the land of the Old Ones.) At the Mountains of Madness is the inspiration for The Thing, the first X-Files movie, and countless episodes of The Twilight Zone and Outer Limits.

I had been aware of the story, and had a vague understanding of Cthulu cult, Old Ones, and Shoggoths, for some time, as they are name-dropped by just about every sci fi author or director of the last 50 years. I had been saving my introduction to Lovecraft for the appropriate moment and I figured I’d finally dive in before seeing this year’s The Thing prequel. It was perfect timing. There might not be a better story to read in NE Ohio during a gray and cold October.

The story, some 70 years old, still holds up. The language is archaic at times but this adds to a sense of period and place and is just a lot of fun to read. Pretty straight-forward plot: a group of scientists journey to the South Pole only to find a previously undiscovered mountain range with odd square-shaped buildings jutting from the peaks, suggesting some intelligent beings once lived there. Except, according to the present ground samples and glaciers, the buildings, if that’s what they are, must have been built millions of years before humans.

Not to ruin it for you, but eventually the scientists’ curiosity gets the better of them.

One structural novelty that would not get by editors today is the constant build-up by the narrator of what we’re about to read. Almost every chapter begins with, “I dread the things I’m about to share with you, but it’s important I share them so that no one else ventures to the South Pole.” Readers have no patience for that sort of throat-clearing today. Which is a shame, because it really adds some cool suspence.

If you haven’t already, check it out before the snow sets in.