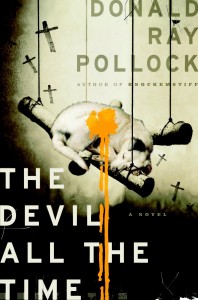 I was lucky enough to get a galley of The Devil All The Time and actually read it in March, but now that it’s coming out soon (July 12) you can read it, too.

Here’s the gist: A handful of smalltown folk grapple with the notion of what God wants for them and their kindred, how much prayer and faith effect their day-to-day business. Characters include a man who gave up everything to God by warring in the South Pacific, only to return home to find a paradise he can’t hold onto no matter how much he prays; a latent homosexual and his wife who collect strange men on a cross-country killing spree; a fire-and-brimstone preacher and his wheelchair-bound cousin; a corrupt sheriff and his prostitute sister.

The prose is…wonderful. Parsed down to the basics in a way I thought only Cormac McCarthy could pull off. Brutal. Unrelenting. Several times I found myself thinking “you can’t do that!” and Pollock just does and it works brilliantly.

I think some will read this as a validation of atheism but, for me, God was pulling the strings for these characters all along, leading them toward each other for that ultimate confrontation at the end.

There is a shifting of perspective throughout, a kind of hyper omniscient point of view, that was a little jarring at first but something I came to accept quickly.

I want to direct this movie. Will someone please give me a bunch of money so we can make that happen?