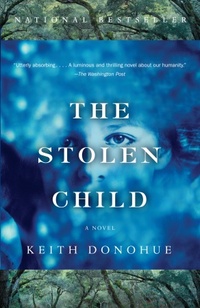 I love fantasy but I’m feeling a bit burned out from all the awful vampire/werewolf/alien books, lately, and have been searching for some new re-imagining of a forgotten legend that has not been played out. I found it in The Stolen Child. I guess I missed out on the whole zeitgeist for this thing as just about anyone I mention it to has already read it. Someone gave it to me as a gift and I read it immediately.

The story is inspired by Yeats’ melancholy poem about the creepy changeling myth and it manages to capture its essence and tone for some 300 pages. It begins as young Henry Day fights with his mother and “runs away” into the forest to scare her into paying attention to him again instead of doting over his twin sisters all the time. There, he is captured by a tribe of changelings, faeries that can alter their appearance to look like human children. One of the changelings switches places with Henry and the rest of the book is told in alternating chapters from their different perspectives as they search for their true identities.

Perhaps I brought too much of myself into the book as I read, but I also felt as though the story was a bit of an exploration on that time in a man’s life when he is forced to put his childhood aside and become the man he must be. For each of us, there is a time when we realize the darker nature of the world and are forced to either find our place in it or lose ourselves to it.

Blah blah blah, psychobable, right? Whatever. The story is great. And, better, it’s something new. Read it.