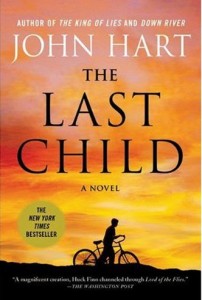 I’m finally caught up on my John Hart, having finished his most recent crime novel, The Last Child. I was introduced to his work by a nice editor at St. Martin’s last year and thought it would be a cool learning experience to read his three books in the order they were published, beginning with King of Lies, to see if I could watch him grow as a writer. I thought maybe I could pick up some tricks along the way.

The Last Child, when you really get into it, is not one mystery, but three, which slowly unravel from the core narrative which is the search for Alyssa Merrimon’s killer, a search that is conducted by her twin brother, Johnny, age 13. What Hart does here is counter to what most mystery authors do. Instead of bringing his threads together as the novel progresses, these separate mysteries (who abducted Alyssa? who kidnapped a second girl? what’s up with this black man who speaks to God?) actually pull further and further apart until you realize they have very little to do with each other, in the end. Or, maybe they are all linked in some metaphysical way. The end product is a more mature story than anything Hart has attempted before, and the one that reads most true.

As in real life, there is no tight, happy ending. Not everything is connected. Or has to be. Sometimes we move from one tragedy to another. I think what Hart is going for here is the idea that grace, in the end, will win against the forces of darkness. And I can get behind that.

Like all Hart’s novels, it’s crazy hard to put down. He’s perfected his pacing and structure over the course of three books. Can’t wait to see what’s next.