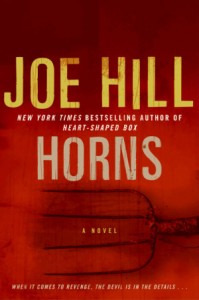 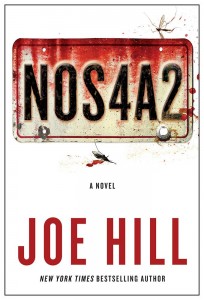 So I got on a little Joe Hill kick this Halloween. Seemed appropriate. I read Heart Shaped Box and really liked it. And found Horns at an estate sale. Then my wife read it in like a day and made me. And NOS4A2. What a cool title, right?

First of all, Hill is thankfully not a “Stephen King-light.” Like his father, Hill loves putting ordinary people into extraordinary situations, and you can tell he’s studied his old man’s writing enough to pick up some of his tricks (calls-backs, magic words, etc.). But Hill’s background as a successful comic book writer informs his novels and gives them a different voice. A funner voice. Earnest, but self-aware.

Horns is about a young man who wakes up with devil horns and the ability to compel people to admit their deepest, darkest secret. It’s a mystery. The guy’s girlfriend is dead and he’s the main suspect and now the horns give him some leverage in the investigation. It’s also a surprisingly touching (and honest) love story. A novel as sweet as it is depraved. I’m still thinking about two scenes in particular. One involves a tree house that may or may not exist and an alien figurine sitting inside.

Just published is NOS4A2, about a vampire of sorts that lives off the souls of the kids he abducts and hides away in Christmasland. It was a fun ride (pun intended) and had the tone of an ambitious graphic novel. This one is very King in concept (with references to Pennywise and others) but its execution is more organized. There was probably an outline. King is jazz. Hill seems to need the sheet music for now. Which is not necessarily a critique.

I dug both these adventures. But there was one thing that bugged me a bit. Both novels propelled to a climax that wasn’t really a climax, one act too soon, which gave that last part the feeling of a really long epilogue. I suspect he’s experimenting with pacing and reader expectation. Interested to see how that develops.