Read This… Inferno, by Dan Brown 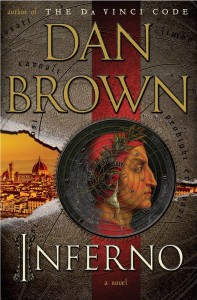 I loves me some Dan Brown. I do. Not because he’s a great writer. He isn’t. But because he is a great storyteller. When I get together with my writer friends (picture us playing poker like on Castle or something) we snicker and chide Brown because he’s a bit of a hack, the kind of writer who never met an adverb he didn’t like. I don’t think he even really knows what being a “good” writer is all about. But, in the end, what the hell does that matter? He’s made more money than any writer ever.

I love reading Dan Brown not for the subtle prose, but for the structure. He’s perfected a structure for storytelling that manipulates the reader into thinking they literally cannot put the book down. He ends each chapter with a little cliff hanger and he’s always teaching you new things, always leaving a bit of the mystery in his back pocket. I study Dan Brown’s writing not to be a better novelist but to steal his structure for use in my nonfiction works. I try to learn from Dan Brown so that my true crime books are palatable for a reader who loves novels and has never read nonfiction before. It’s a wonderful structure for a real mystery.

I took Inferno on vacation with me last week. It was, literally, a beach read. And I think it’s probably his best work to date. It’s certainly a more literary novel than The DaVinci Code. With a bit of whimsy, Dan Brown takes all the tropes he invented with The DaVinci Code and Angles and Demons and turns them upside-down. In this story, Robert Langdon has lost his memory. He wakes up with no memory of the last 48 hours and must piece together his own history as he tries to solve the riddles of a man obsessed with Dante’s Inferno. Kind of like The Hangover. But more Florency.

But with Dan Brown, the mystery usually serves as a device to introduce the reader to a new idea that Brown thinks is really cool. Anti-matter. Jesus’s kids. Blah, blah, something to do with mind control. In Inferno, Brown teaches us about overpopulation. And what we learn is fucking scary. Like, depressing, why take the time to finish the book, scary. Seems we’re probably not going to survive the next 100 years because people are having too many babies. The Big Bad of Inferno is going to release a new virus to “cull” the population if Langdon doesn’t stop him in time.

Without spoiling the solution, Brown took a BIIIIIIIIG risk with the ending of this one. In hindsight, I think it’s possible this is a novel with no resolution, that rare story where nothing is actually accomplished, but you still feel satisfied somehow. The ending of Inferno changes the world in which Langdon exists. Permanently. I’m very curious to see if Brown has the cajones to address this new world in following Langdon adventures or if the repercussions of Inferno will be ignored the way the Kenny’s death gets ignored in each new episode of South Park.

I’m giving him an extra star for guts this time. Well done.