Read This: Joyland, by Stephen King 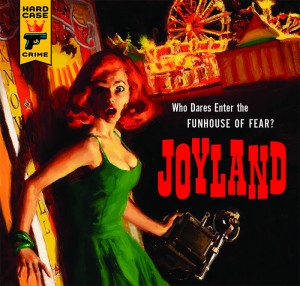 Ever since completing the Dark Tower saga, I get a sense that Uncle Steve is just having fun. His post-Tower books stand on their own the way his early books did. They are less referential, less meta, more earnest. It’s like watching a music legend walk into a corner pub and start twinkling the keys because, hell, he wants to.

Joyland is a simple tale well told. A young man, heartbroken for the first time, works at a beach-front amusement park during a summer in the 70’s and happens upon a mystery. And maybe a ghost. King’s last book for Hard Case Crime, The Colorado Kid, remains my favorite mystery novel of all time. But Joyland is probably the better story.

What’s fun is how King paints the feel of the park during a certain summer. I could hear the creak of the boards on the old Spin, the sound of the waves outside Devin’s bedroom window. And there’s the fascination with the world of the carny, complete with its secret language, which we are treated to. And the haunted house. And the psychic. And the murders…

This is a beach read set on a beach. Tailor made for now. Take it on vacation!