Read This: Mockingjay, by Suzanne Collins 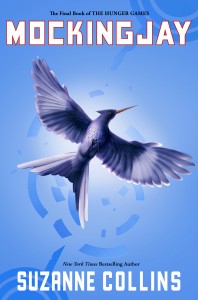 All good things must come to an end.

Finished Mockingjay last night around 2 a.m. because the last 75 pages grabbed me tight and wouldn’t let go until it had its way with me. In this third and final book of the Hunger Games trilogy, Katniss and company wage war against the Capitol, revenge for 75 years of games and death for the working class of Panem. But Katniss is most interested is putting an arrow through President Snow’s cold heart.

Like Catching Fire, this third story meanders for a bit at the beginning and readers are left wondering about the goals of the narrative. Again, many deaths happen off-stage. I actually growled when Katniss (and the reader) were left behind for a “high stakes” Capitol raid. But then something wonderful happens. Collins, like many of her YA saga-writing peers, could have played it safe and written a pat ending where everything is sweet and wrapped in a pretty bow. J.K. Rowling committed a literary travesty by not actually sacrificing Harry and others at the end of her series. Heroes, after all, can only be as good as the bad guys are bad and how bad can they really be if everyone is still alive at the end? Anyway, Collins is a risky writer. She put all her chips on the table for the final third of this book and she kicked some ass. She more than makes up for the off-stage deaths that happened before. By the end, the stage is soaked in blood. There is a death in here that is so shocking and meaningful that the very act of daring to write it elevated the series to the level of Ray Bradbury or perhaps Joseph Heller.

Speaking of Bradbury, did you catch the homage in Katniss’s troop number? Fahrenheit 451 is certainly an influence on Collins. Panem is a world glued to the television and preoccupied with war games, too.

There are many parallels here to Hamlet, as well. Especially the whole business with Katniss constantly wondering just what the hell she should do. There was this production of Hamlet at Kent State many years ago. At the end of the play, when the king is lying dead, Fortinbras enters with his troops and takes the thrown. And he’s dressed like a Nazi. If all we’re really doing is replacing one tyrant with another, why are we even fighting?

This book is required reading for any author daring to end a saga. Collins gets it right.