Read This: Who Killed Betsy? 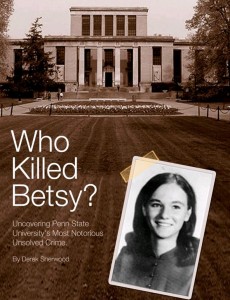 Long before Jerry Sandusky, Penn State learned well how to cover up the darkest aspects of human nature. During the Thanksgiving break, in 1969, a young student named Betsy Aardsma was murdered in the creepy stacks inside the Pattee Library. Stabbed once, through the heart. Her killer was never found. These days, reporters can’t even request the old student newspaper articles on the case. They’ve been scrubbed from the web and “misplaced” by the university.

That didn’t deter Derek Sherwood, who works as a credit card processor during the day and a reporter at night. In his book, Sherwood takes the existing articles and rumors about the case and uses the documents to tease out new leads. The first half is a detailed account of the days surrounding the murder, in 1969, an introduction to the real Betsy and the men who may have killed her. The second half becomes a kind of character study, in the creepiest sense, of the main suspect, associate professor of geology Richard Haefner. Sherwood takes us deep into the man’s mind and systematically lays out the circumstantial evidence suggesting Haefner’s guilt. Let’s just say Haefner had a lot in common with Sandusky.

I read this book in a day and had terrifying dreams about Haefner last night. The writing is stark and simple but Sherwood shines whenever he allows himself to explore tangential characters who are as weird as Haefner, himself. Fans of true crime need this book.