Read This… The Dog Stars, by Peter Heller 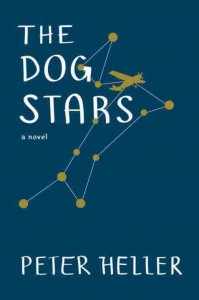 What is it with post-apocalyptic novelist feeling the need to go all Cormac McCarthy with their voice? Nobody will ever do it as well as ol’ Cormac did in The Road. And here, it feels a little too artificial. Just tell me a story, dammit.

The Dog Stars has something in it. Something I rather liked. There’s a kind of naturalist sensibility in the description of the world after the flu or some kind of genetically-engineered disease has killed off just about everyone. The relationship between Hig and his dog, Jasper, was a cool new twist on the genre. Nobody needs another father/son tromp across the wasteland. The prose, though distracting, was often prayer-like in a decidedly Terrence Malick way, especially whenever Hig goes looking for trout.

I want you to know I recommend this novel. I do. But it really flirts with the line for me, sometimes. There’s a point where Hig encounters a woman and his immediate sexual response to her kind of diminishes the love story the author as set up in flashbacks between Hig and his wife (whom he may have murdered to keep her from suffering).

I don’t know, man. A good book, I think, to keep in a hunting cabin or vacation home, to pick up when it’s raining outside.